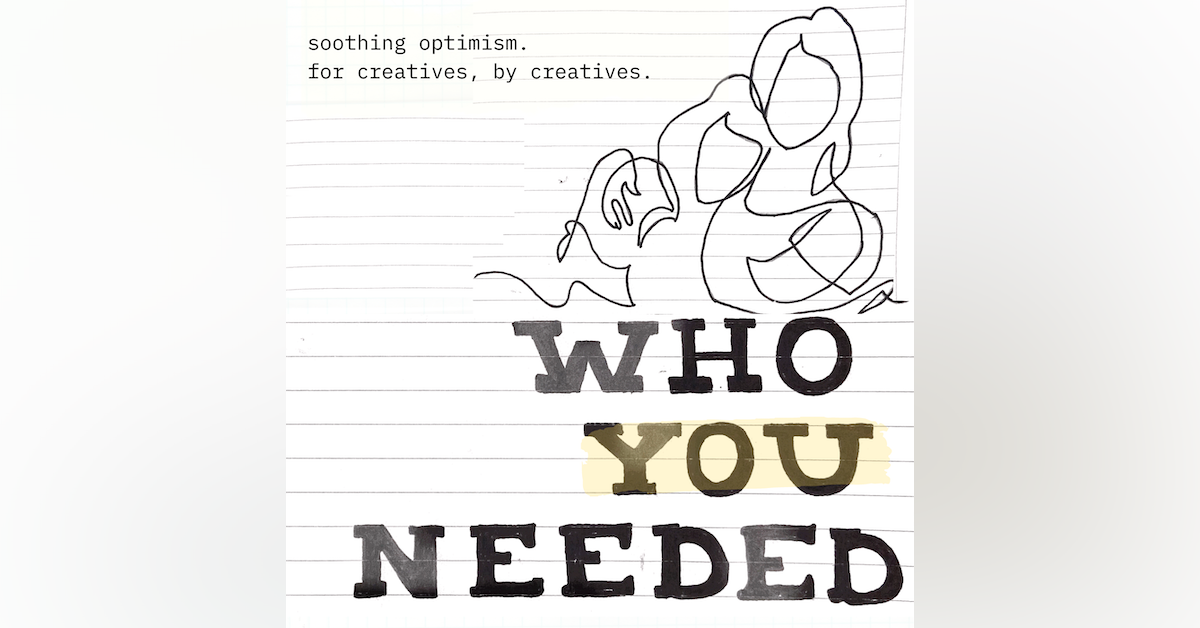 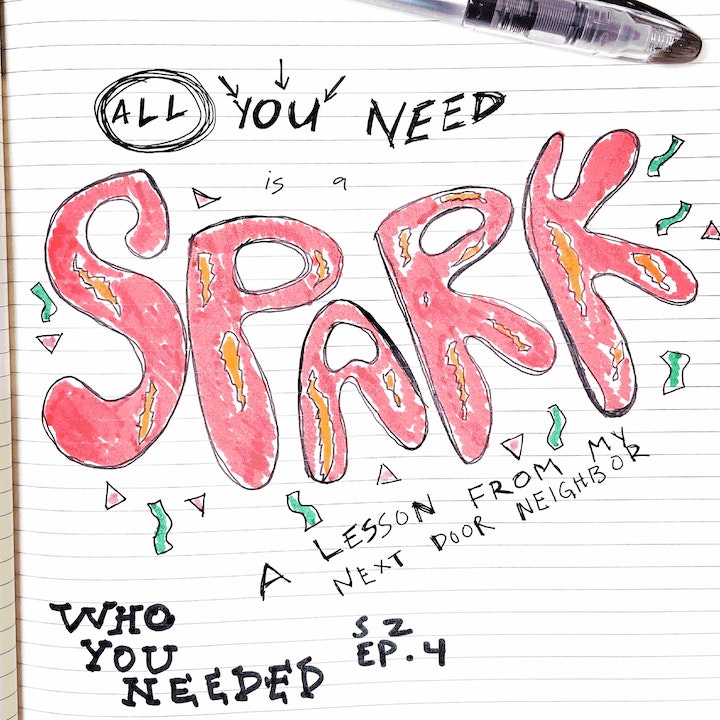 In our frequent attempts to connect with people, we can fail to understand the relationship with ourselves. Beyond liking yourself, it’s important to understand yourself. The care that you put into fostering your self-identity and choosing process over ego.

In our frequent attempts to connect with people, we can fail to understand the relationship with ourselves. Beyond liking yourself, it’s important to understand yourself. The care that you put into fostering your self-identity and choosing process over ego.

Hey you - it’s Helen and you’re listening to the Who You Needed Podcast. Season 2. Episode 4. This episode is titled “All You Need is a Spark — A Lesson from my Next Door Neighbor”. Stay tuned for more.

Are you looking for a tool that can spark genuine conversation and fuel new ideas for content? You’re in luck because this episode is Powered by Pod-Decks. I rarely welcome ads into the show because I respect your time and money as a listener. But, I genuinely believe in Pod Decks as a company. Travis Brown invented different decks of cards for podcasters who might be struggling to connect with a guest for the first 15 minutes. Or, what the theme of the next episode should be. I have 5 different decks myself, I have the What the Heck Decks,

Cecil is my next door neighbor and I enjoy her platitudes like my best friend enjoys watching “The Office”. I run into her while on my evening walks from time to time. At the beginning, our conversations never went beyond the polite niceties of ‘hello’ but on Saturday, 5:03pm…everything changed.

I go on a walk daily. Admittedly to get my steps in and to convince myself that I engage in moderate to intense exercise. Walking gives me perspective and time to observe people. My street is usually quiet and I take a notebook with me from time to time for inspiration.

That’s when I ran into Cecil .

We started with polite hellos like the usual cadence, but then I asked her what her favorite memory was as a young woman. Her eyes lit up. Her arms uncrossed and fell relaxed on her hips. Cecil is in her late 70s. Spent her life has an English teacher, and colored her story with the same exaggeration you would expect from a writer. She told me about the first time she fell in love.

I first met him in college. I was walking to my first, ever, college class. He was two steps in front of me and I saw him. He had an old, worn sports backpack. His basketball number was hand-sewn on the front pocket. And his last name, “Parsons” was written on the bottom right corner. He loved that backpack. He said his mom had sewn that for him in high school. He still wore it everywhere he went. That day, he wore his baseball cap backwards and had on a black t-shirt and jeans.

Our first conversation happened that day. He said hello when I saw him walking past and said he already knew me. Heard the other fellas talking about you, he said. And I was smitten with him—not because of how he looked or by his athleticism. Rather, in spite of it. Gosh, I never thought I would fall in love with a basketball player- No, I loved him because he challenged me. He was kind to me and it was like he saw past my guards of eloquent gestures and charm. He saw that I was holding something back — my spark — and he knew it like he knew he had eggs for breakfast. Incredible, I thought.

And for someone to know you like that AND to want to know you in that way. That was love.

Then, she looked at me and added something that stayed with me forever:

“Love is not love without recognition, especially if that relationship is with yourself.”

Pure story is often very rare these days. To meet someone like Cecil, a woman so aware. Acutely aware of who she was and the circumstances around who helped her find the spark. Often, beginnings of a love story can  be corrupted by sadness or grief — that’s how you know her story is real, because it told me something true. It kept an element of joy. Dreamy eyes and joy.

The story also goes beyond just a story on love. It’s about being seen. Allowing yourself to be seen.

There’s nothing more enchanting than story

for me an enchanting quality that helped color my life like hot sauce colors a beef taco. It spices it up.

After I spoke with her on my walk. I began to think about love and how love & the desire to create something was not very different. There is very little that shapes human life more than love. Often, even the feeling of love can propel me to create.

Philosophy of Creativity - Where does it come from?

I began to think about the last piece of what she just told me, love is not love without recognition…even if it’s just a relationship with yourself? What’s that supposed to mean, I thought. Admittedly so, our conversation had run into the dark night but I forgot to ask her what she meant by recognition of self as a great form of love.

So, I began to ponder it. Like any nerd would do.

I found an extensive body of literature that referenced recognition of self as the key foundation to character development And creativity. In his book, “The Art of Loving” Eric Fromm writes,

The affirmation of one’s own life, happiness, growth, freedom is rooted in one’s capacity to love, i.e., in care, respect, responsibility and knowledge. If an individual is able to love productively, he loves himself too; if he can love only others, he cannot love at all” (55-56).

In our frequent attempts to connect with people, he says, we fail to understand the relationship we cultivate in ourselves. Beyond liking yourself, it’s understanding yourself.

Positive self-image can be polluted by the self-critical voice. When we become adamant to looking on at what our competitors are doing, we inadvertently turn our gaze…and compare the validity or weight of our work to something that is not ourselves.

There’s a difference between self-criticism and process.

There’s this amazing quote by Eunice Moyle that says, “…once you’ve made something, it’s great to step back and critique. The key to being creative is to have no ego — it’s about the process (which is messy and iterative sometimes), and everything can always be tweaked and refined, so don’t be afraid to try something a few times until you get it right, and to toss out drafts that didn’t quite work.”

It’s okay to to improve. In fact, I think it’s what makes an effective creative—those that are open to feedback.

It just needs cultivating and practice (like an athlete).

One of the books that have been paramount to my creative practice is Atomic Habits by James Clear. In the book, he discusses an experiment that a photography teacher does on his students:

Jerry Uelsmann, a professor at the University of Florida, divided his film photography students into two groups.

Everyone on the left side of the classroom, he explained, would be in the “quantity” group. They would be graded solely on the amount of work they produced. On the final day of class, he would tally the number of photos submitted by each student. One hundred photos would rate an A, ninety photos a B, eighty photos a C, and so on.

Meanwhile, everyone on the right side of the room would be in the “quality” group. They would be graded only on the excellence of their work. They would only need to produce one photo during the semester, but to get an A, it had to be a nearly perfect image.

At the end of the term, he was surprised to find that all the best photos were produced by the quantity group. During the semester, these students were busy taking photos, experimenting with composition and lighting, testing out various methods in the darkroom, and learning from their mistakes. In the process of creating hundreds of photos, they honed their skills. Meanwhile, the quality group sat around speculating about perfection. In the end, they had little to show for their efforts other than unverified theories and one mediocre photo.

It is easy to get bogged down trying to find the optimal plan for change: the fastest way to lose weight, the best program to build muscle, the perfect idea for a side hustle. We are so focused on figuring out the best approach that we never get around to taking action. As Voltaire once wrote, “The best is the enemy of the good.”

Allow yourself to fail. Get into a space into discovery. This is of more value than getting it right the first time.

Love is not love without recognition, especially if that relationship is with yourself.